The unfortunate story began when AEAT was created by the privatisation of part of the United Kingdom Atomic Energy Authority (UKAEA) in September 1996. As required by the Secretary of State and an Act of Parliament (The Atomic Energy Authority Act, 1995), a pension scheme was drawn up that was stated had to be at least as good as the UKAEA scheme from which employees were transferring. In fact, two schemes were proposed, with one (the ‘Closed Scheme’) only available to existing employees. This was a mirror image of the UKAEA scheme, which was an index-linked final salary one. The alternative, the ‘Open Scheme’, was open to all and had higher benefits, but there was a cap of 5% on the index-linking of benefits. The ‘Closed Scheme’ was regarded by employees as the less risky- scheme.

Employees had the option to transfer past service into the Closed Scheme, or to otherwise freeze it in the UKAEA one. The deciding factor, assuming the schemes were at least equal as pledged in the Atomic Energy Authority Act (1995), was a gamble on whether one’s personal salary would increase at a greater rate than that of inflation. Glossy handouts, staff talks, and a post-privatisation note from the Government Actuaries Department document (GAD), to which the pension transfer forms were attached, encouraged employees to transfer into the new scheme. Any associated risk was never addressed and, indeed, it was stated in writing that the pension fund was independent of AEA Technology’s financial future.

Between 1996 and 2011 AEA Technology undertook various acquisitions, divestments and restructuring These affected the viability of the pension scheme. A scheme deficit arose and sometime before November 2011, the company entered talks with the pension scheme trustees and other interested parties to precipitate a pre-pack insolvency. This procedure enabled AEAT to walk away from its pension liabilities and carry on trading as a subsidiary of another company. At the time AEAT entered administration it was profitable and actively recruiting, the insolvency event was precipitated by the trustees of the pension fund billing the company for the entire scheme deficit based on annuity costs (which was much more than the deficit recorded by the company). The pension scheme members were only told of the risk to their scheme in August 2012, when the negotiations were all but complete. The insolvency event was precipitated by the trustees at the start of November 2012. This was the same time they applied for the scheme’s entry into the pension protection fund (PPF).

If scheme benefits are reduced to PPF levels, members who have not reached retirement age will have their pension payments reduced by 10%. However, the important factor is that index-linking will be capped at 2.5 % on pensions accrued after 1997, and there will be no index linking whatsoever on pensionable years prior to this. The latter includes all of the service employees transferred from the public sector on the assurance their pensions were safe. Inflation protection is a key feature of any pension and a loss of index-linking is likely to more than halve the value of a pension pot. The effect of even low inflation on the value of a pension is dramatic over a 10 year period: 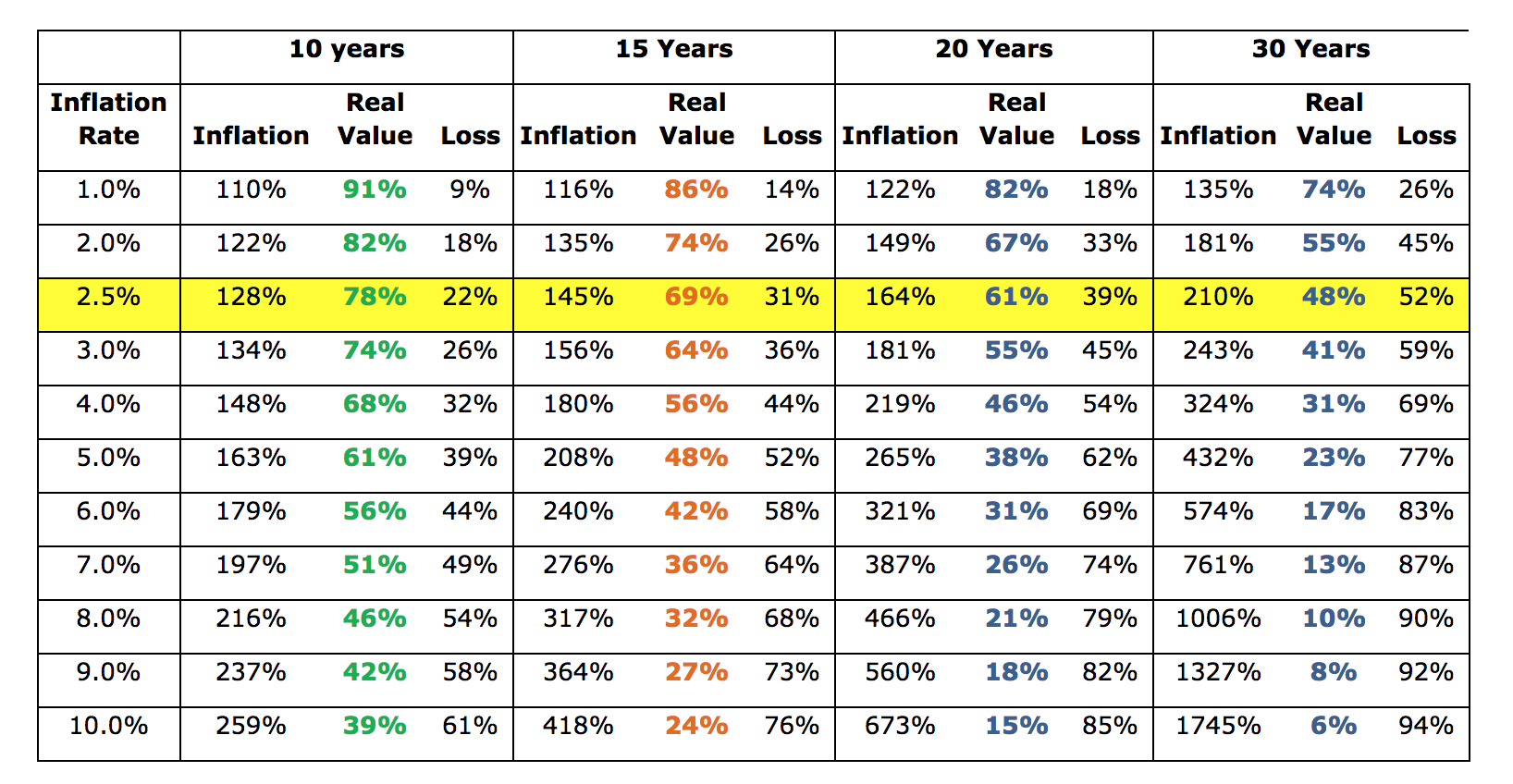 The table above shows the effect of different rates of inflation on a sum of money, with the 2.5% rate highlighted. Look at this carefully. Inflation can creep up on you relatively unnoticed.

The maximum inflation compensation given by PPF is 2.5%. If inflation is less than 2.5% you will receive less than this, if inflation is more than 2.5% you will still receive only a 2.5% increase. Furthermore any employment with UKAEA prior to 1997, when you were a member of their contributory pension scheme, receives NO INCREASE WHATSOEVER FOR INFLATION. For example if you retired in 2012 from AEA Technology plc with 40 years pensionable service, you will receive a maximum increase for inflation of 2.5% for the 15 years (1997 - 2012) service and NOTHING for the previous 25 years service. If you have service prior to 1997 your purchasing power of your pension will be seriously reduced over the years to come!

The net result is that for some members, the agreement of the pre-pack insolvency event will result in probably a half to two thirds of their pensions eventually being lost. The fact that many of them are either retired, or approaching retirement age, means they have no chance to recover the situation and they will be condemned to an old age of hardship. This is despite saving responsibly throughout their lives - behaviour the government is trying to promote.